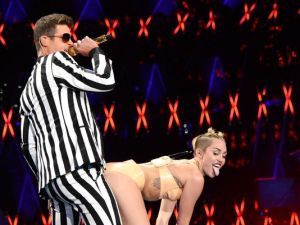 If you don’t follow my twitter (and you SHOULD) you would have missed the many lambastings I made towards Miley Cyrus and that cringe-worthy cartoon of a performance she exhibited at the MTV VMA Awards Sunday night.

To sum up, I called her a GREASY, tongue-wagging, try-hard, NON-talent, Hillbilly, who made me want to wash my brain with BLEACH after watching her STUNT. And I say stunt, because using a Giant foam finger to simulate sex with or to use as a faux-phallus is a shock and awe tactic to distract from any kind of REAL Substance, nothing more.

Now, in the other corner, is Robin Thicke…a talented R&B ARTIST who has been working on his vocal craft for over 15 years. Blurred Lines is essentially the culmination of years of hard work, great timing, luck, and five previous album releases. Yes FIVE…there is NO such thing as an overnight success, and if there is, it’s temporary I promise you.

So back to Sunday night…Robin & Miley did their collab that had many people JUST as disgusted with Robin Thicke as they were with Miley.

I actually didn’t see Robin in a bad light after this at all; I simply think it was a poor judgement call/short-sightedness on his part. The need to appear within the 18-25 demographic that his summer anthem Blurred Lines placed him in, was a pressure cooker scenario waiting to boil over.

I’m not an ageist…but Robin is a married dad…there’s some decorum that he needs to adhere to that doesn’t apply to a bachelor like Pharrell Williams. People complained about their music video? It’s like Romper Room in comparison to Miley’s skeevy raunch.

First of all, the age difference between the two (he’s 38 she’s 20) made Robin appear like a Pedo McPedophile.

However, if you watch the segment back…he NEVER even touches Miley. She was the one who was greasing ALLLLLL over him in every which way, and she is the one who backed herself up into his nether region for that ‘money shot’.

What was he supposed to do…run away on live TV? Maybe it was all intricately choreographed, but she laid it on THICK, with an extra slab of sex-vomit.

He should have done a collab with Bruno Mars. Safer, and higher calibre of talent. It was a terrible idea, one that was probably thought up by the MTV camp. Shock and Awe is the name of the game at the MTV awards, I’m aware. But you can agree not to participate. Even grown married men need to learn not to cower to the pressure, but I don’t BLAME him.

Apparently Paula Patton, Thicke’s wife was at rehearsals and sources are claiming that she is totally “cool” with the whole thing.

Rehearsals are one thing. A LIVE performance that is enhanced by swarms of fans, adrenaline and who knows what else is ANOTHER. She can’t possibly feel good about what she saw, nor the backlash that accompanied it. Even if she was smiling afterwards, she has to be conflicted about the whole thing.

Yes, even her mother-in-law Gloria Loring had a few choice words to say about the whole erm, ‘display‘. 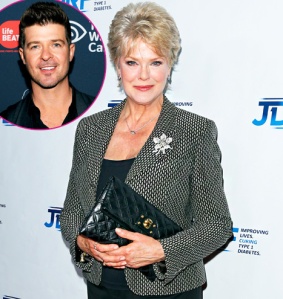 “I didn’t get what her point was,” Loring said. “It was so over the top as to almost be a parody of itself. I think she’s misbegotten in this attempt of hers. And I think it was not beneficial.”

So here’s why I think Robin Thicke will eventually apologize in some way or try to distance himself from the episode just like Justin Timberlake did with Janet Jackson after the Superbowl scandal that was dubbed ‘Nipple Gate.’ If you remember, Timberlake waited a WHOLE week post Super Bowl to make a statement, and many people saw his ‘apology’ as throwing Janet Jackson ‘under the bus’ in her darkest hour.

Ms. Jackson is an ICON and I get why many thought Timberlake’s apology was an abandonment of sorts.

But Miley Cyrus? I say throw her straight INTO the BUS Robin Thicke.

Clear your name of this DISASTER!!!

Thankfully Thicke is under the Universal label imprint and Miley is under Sony.

What Does This Mean?

This is an essential distinction for him to be able to make a statement in the coming days, as they are NOT label mates, and therefore there is no political red tape for him to wade through should he want to speak his mind. Miley has her new album coming out soon, and a statement of any kind could drastically affect her record sales and HE KNOWS THIS. It would be prohibited if they were on the same label for him to speak, and I’m so glad this won’t play a factor in his decision to do so.

I personally think rather than come out with an official statement, that we will see some admissions of regret in future interviews as he continues to promote his album. It will be subtle, but it will be there.

As for Miley…I’m convinced she will be a foot note in the hall of whore famed history books, and that is not me slut shaming her; she has SHAMED herself.

She got into the business through the “Nepotism Express” via Disney’s Hannah Montana. Her singing is AVERAGE and she can’t act her way out of a paper bag as has been proven from the films she’s been in post Montana. I don’t have the patience to watch this little girl, and yes, she is a LITTLE GIRL prove to the world how she is not Hannah Montana (we get it Miley, we REALLY get it)

She should serve as a CAUTIONARY tale for the Disney machine constructs that end up raising millions of impressionable young girls only to CHEW OFF the precious little hands that once fed them.

I have to go wash my brain now.

UPDATE: Robin Thicke makes a pseudo “soft apology” citing his [crotch] was an ‘innocent party’ at the VMA’s Here That’s code for “I’m throwing you under the bus Ms. Miley” now that your album officially dropped days ago and I can speak my mind and save my marriage!

Make your Monday workday great—whether you work at the office, #WFH or the rice fields in Tibet. Amazing Biggie “Hypnotize” Dance via @eggs.tyrone
Helping someone else is a blessing to YOU. It’s up to the person to do the real inner work but you can help someone in need—with an ear to help them feel seen and help them get back on their feet. Life is a wheel, ups and downs are a part of life. #ISeeYou #MentalHealth #GivingisABlessing #Bless #Blessing #Blessings #TearsAreHealing #LiftUp #LiftUpOthers #Writer #Twitter #QOTD #Friendship #Sisterhood #Tweets #MyWords #Words #MyWriting #MyWrites #VulnerabilityIsStrength #ShowUp #Love #Giving
My double header Can Lit new books: #Lucky by @marissastapley and #EverySummerAfter by @carleyfortune. Can’t wait to dig into both of these Torontonian ladies tomes! Also had to throw in my #Wasabi @gelcare.official mani courtesy of @lemanoir!
7 years ago today I met the wonderful #AdrianGrenier for a piece I co wrote in @hellocanadamag. A really great guy who truly cares about #Eco matters + saving our #Oceans. #EcoConscious #Green #Actor #Sustainability #Media #Entourage #DavidBitton #BuffaloJeans #Toronto #TDOT #TO
Friday ☀️HEAT WAVE vibes coming to you courtesy of the badasser—y HOTNESS of @aureta and those fab but-I-could-never afford @annakarinkarlssonofficial baby blue equally badass couture shades. 😎
#ThrowbackThursday. Supermodel #NadjaAuermann truly is/was 1 face with my mom in her youth minus le nez. #TBT #Supermodel #90sSupermodels #90sSupermodel #80s #90s #BlueEyes #PopCulture
This @bashparis jean jacket and skirt is my ☀️spring 2022 vibe. Pants BE GONE! #SkirtSeason #SkirtLove #BashParis #InstaStyle #InstaFashion #Style #Fashion #Spring #SpringStyle #SpringFashion #Montreal #MTL #MaisOui #Spring2022 #Strut #Love #Want
Every day is a good day for @harrystyles music and dance stylings of @nobodysausage. #HarryStyles #Stylers #InstaDance #DanceitOut #PopDance #Dance