I unabashedly refer to the days that lead up to the annual Toronto Film Festival as the “Anxiety Broth that is TIFF prep.”

There are lists to get on, invites to RSVP for, films to attend, hair, make-up and outfits to prepare. I oftentimes find myself in the swampy trenches of being uncharacteristically needy and pandering to self-important publicists, handlers + wranglers; it’s an art form, really.

After 12 years attending the film festival, the foreboding agita and onerous pressure when attempting to cover this mammoth entity ceases to abate. Being that I am leashed up to my Twitter-feed 24/7, comes the constant realisation that I’m missing out on something, and trying to play catch up can be exhausting. One thing that was absent in my earliest days of TIFF was the cacophony of cellular noise, and in many ways I feel we’ve lost a sense of being present and in the moment. Technology giveth—that’s certain, but man does it ever taketh away.

But alas, this sounds all first world complainy. The truth is, once my footing is secure and smoke-signals are all approved, TIFF is never short of being an incredible experience.

What is always a saccharine-laced pleasure are the gifting lounges that I’m loyally invited to, where I become introduced to likeminded plebes, brands and important charitable causes. They are a welcomed balm from all the chaos, and oftentimes where the most valuable connections are made. While the film purists might disagree, I believe they are an essential component to the festival and a great boon for Canadian brands to get noticed on an international level. NKPR’s  IT LOUNGE curated by president Natasha Koifman is usually my first stop. It’s always a wonderful pastiche of intermingling with celebrities, models, athletes, media personalities, fellow journos, friends and strangers alike. It’s a vibrant social experience with an incredible live DJ, and incidentally where I do my best day-drinking. 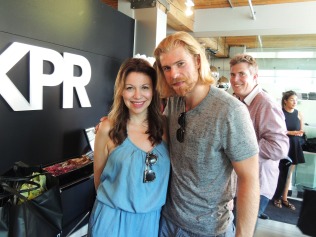 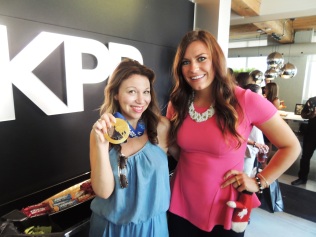 It was here that I met pro Hockey Player (and Chris Hemsworth doppelgänger) Michael Kostka and got to try on the GOLD MEDAL of Olympic winner and Amazing Race Canada contestant Natalie Spooner! I also had the pleasure of bumping into the gorgeous gals from CTV’s The Social, and yes, I know I look like I gotta-go-tinkles in the photo below.

I loved interacting with the brand reps from Davids Tea, Rudsak and Yogen Früz (all companies that originate from my hometown of Montreal no less!) Yogen Früz were promoting their Pink Velvet froyo, wherby 10% of the proceeds go to The Canadian Breast Cancer Foundation from September to October, a cause that is close to my heart.

Despite it being a sweltering day and the pace inside the IT LOUNGE fast and furious, I dab on my newly procured calming Saje Wellness essential oils, take a deep breath and continue on with the days schedule.

Next up, I head over to the International Hotel on Front St. to check out The Tastemakers Lounge which celebrating its tenth year at the festival. Tastemakers is flawlessly run by Rock It Promotions Debra-Goldblatt and Divine Lab’s Leesa Butler, in incidentally was the 1st celebrity gifting suite to ever appear at TIFF.

Tastemakers is much more of a private enclave in a subdued suite, and I instantaneously take off my oppressive heels and sink into the plush carpet. “Tastemakers is an oasis and a respite for celebrities and media to get away from the craziness,” says Butler who escorts me around the suite personally. Like the IT LOUNGE there is an emphasis here on Canadian brands like Danier Leather, Sorel Boots, and Lush Cosmetics. Lush technically started in England, but had its first international store in Vancouver and continues to supply all 150 stores from its two cosmetic kitchens located there as well.

I can’t say enough about Lush Cosmetics. This is a company that truly cares about its eco-footprint, fights animal testing, buys their products ethically and gives back in on-going charitable campaigns.  At Tastemakers they were promoting their Charity Pot hand and body lotion, which helps support grassroots charities such as Girls Rock Camp Toronto.

While I could go on about the other lounges that pop up during the festival, the aforementioned are truly the Gold Standard when it comes to TIFF. I did enjoy a visit to the Variety Magazine Lounge at Holt Renfrew where I had a chat with Scott Speedman about how he was a terrible interview back in the day. He sheepishly admitted that he is much better today, and that it was just a matter of “shyness“. ‘Keep talking gorgeous…’ I think to myself as he tells me he doesn’t miss Toronto and loves living in L.A.—adding that “Toronto has come a long way though!” 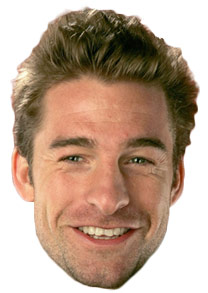 I also saw Willem Dafoe there who is surprisingly hobbit-height for someone who is so commanding on the big screen.  Ethan Hawke also came by and he looked incredible with a great aura about him. It was a great way to spend an afternoon (and day-drink tequila) while hearing about a comedic celebrity who was in the day before who had everyone removed in the lounge to be alone. It was a surprising egocentricity (he didn’t want to be looked at?!) I had not expected to hear from this barely A-list star whose name will go unmentioned.

Alas, I don’t Talk out of Lounge.

Now on Netflix. This story is basically how I view the world and culture and such a unique take on love in 2023 no matter what it looks like. Laughed my ankles off. What a cast! #YouPeople #Netflix #NowPlaying #Culture #PopCulture #JonahHill #eddiemurphy #julialouisdreyfus
You are not alone. @gabormatemd is a trauma healing specialist. Follow him. Get his books. Looks into #psychedelics or other healing modalities. Find community and connection and your tribe. Peace to you. Xo
You can heal your trauma in so many incredible all natural ways in 2023. Art via @sharecestudios #Trauma #LaurynHill #ArtTherapy #traumarecovery #Peace #EMDR #CBT #DBT #PopArte #PopArt #Painting #AnimalHealing #WimHof #GutHealth #psychedelic
The Evelyn Centre will be built in Muskoka and possibly in BC. I need #HNW investors so that it’s FREE or at a very low cost to the patient. DM or email me. #SSRI #SNRI #EFFexor #Paxil #Ativan #Xanax #Withdrawal #HelpIsComing #StayClose #SteadyOn #Canada #FREE CC: @rosenzweig_company @bialikbreakdown @vancityreynolds @michaelbuble @maximumeffort @sir_twitch_alot @soniazarbatany @juliangiacomelli @inspirebydoing @jessicamulroney @zarakfatah @alanis @mattbarnesphoto @nbcsnl @the_griffin_brothers__ @andrewkluft @vanessagrimaldi30 @oneyogasamantha @mdmotivator @blakelively @jlo @bettybuzz @slevydirect @sherylcrow @thesherylleeralph @soulful_vibration_coaching @sethzog @brenebrown
Love you @melrobbins 5, 4, 3, 2, 1…
When I grow up I want to be THAT guy. 🙏🏻🧘🏻‍♀️💗🙂💜💊🍷🏠🌈 #InnerPeace
I love what I see when I look in the mirror that’s all that matters to me. And Lulu—everybody else has their own cross to bear and it’s not my problem or my business.