When it comes to May December romances between the sexes, its clear in this particular space, that it is in fact a Mans World.

I say that without any umbrage towards the dudes of the world—it just seems to be the case, over-all.

Case in point, Robin Wright announces today (which is PR parlance for its been done-zo for weeks) that her engagement to actor Ben Foster is OVER.

Her reasoning, as has been publicly released—was bridging the gap between their 14-year age difference, and it was specific enough to note that the split was ‘her decision,’ hmmm.

This gave me the sads for a multitude of reasons.

For one, I was so pleased to hear of her new-found happiness over the summer after she spent all of her best  years having to deal with Sean Penn’s alleged philandering and temper all the while, bearing his two children. Her ex has enjoyed countless relationships with women decades his Jr (allegedly during their marriage)—and it was nice to see her getting some well-deserved attention from a younger suitor. After all she is still an extremely beautiful woman.

And 2, far too often May December romances between Older Women and Younger Men often end in tears, with women bearing the brunt of the heartbreak. *This is my experience and view. Would love to hear if you disagree!

And finally, there was something a little too PR vetted in that mention of ‘her ending it’. Again, the idea that if that wasn’t CLEAR who dumped whom most would assume she was DUMPED due to her age, and possibly affect her career?

She has a prime role on Netflix’s hit House of Cards and my gut tells me that this mention of who cut ties 1st, was deliberate and negotiated well-beforehand. We know all too well, how difficult it is for actresses over 40 to land plum roles in Hollywood, and while I may be ‘reaching a tad’ this is what it reads like, to me.

In comparison to her announcement of ending her engagement comes the news this week that two male celebrities on their 3rd marriages respectively, marry women 20+ years their junior.

Again without a tinge of bitterness (ok, maybe a little) it’s significant, as the pendulum shift between the sexes is so vastly different.

Men, for the most part age better than women (from a natural stand point)—the old adage that wrinkles and silver hair on men are SEXY, has never wavered through the years. This week Marc Anthony married a woman 20 years his Jr. and Jeff Goldblum a woman 30 years his Jr. And there are myriad more examples of this phenom of older man/younger woman run rampant in our culture ad nauseaum.

Whereas in reverse, these relationships last rarely-to-never between an older woman and a younger man. Think Madonna and her failed marriage to a decade younger Guy Ritchie, and her subsequent fleet of romances with men barely older than her own daughter. Demi and Ashton, who (Ashton) incidentally left their marriage after cheating with a barely legal young woman, and ended up with a decades-younger-than-Demi, Mila Kunis.

The examples are endless.

There seems to be a running theme or a built-in time frame between this OW/YM dynamic on when they generally begin, and when they seem to end. A younger man in his early 20’s may find an older woman in her 30’s or early 40’s extremely alluring, but that seems to dissipate once a man reaches his mid 30s and said woman nears her late 40’s early 50’s. It’s then that generally men start to date younger, if they never did before. *I stress generally as no one despises sweeping clap-trap statements more than moi. 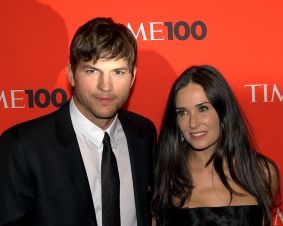 The Way They Were: Ashton and Demi Casper Smart and Jennifer Lopez, Brahim Zaibat and Madonna.

The rare exception(s) to the rule is the 13-year-age difference between actor Hugh Jackman and his wife Deborra-Lee, but unless you live under Kim Kardashians gargantuan bionic greased-booty–you’ve had to of heard of the extensive BEARD rumors?!

So really, that leaves us with the remaining romantic May December romance for the ages—pun intended. The incredible LOVE STORY between actor Max Caulfield (Grease 2 fame) and his wife, actress Juliet Mils—18 years his senior. They have been happily married since 1980.

He has no reason to need a beard as his career has never really taken off— and he has no reason to keep up appearances for the sake of his career. It saddens me that I even have to mention it, but it’s also been a point of contention. I see the *LOVE* between them in spades.

May December True Love for the ‘Ages’

But what do we know? Hollywood is rife with smoke and mirrors, PR posturing and illusion run amok.

Beyond the Brangelina’s of the world, I find ‘Hollywood couples’ highly underwhelming yawnathons and look to my real life examples and draw from there.

Here’s to AGELESS Love in all its forms, whatever they may be.

One thought on “May December Romance Disparity Between the Sexes”