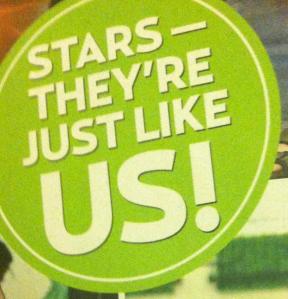 Earlier this week, the freakishly gorgeous child spawns of Will and Jada-Pinkett Smith gave a joint interview to the New York Times Magazine Blog. While the occasion was to promote each of their solo musical efforts, their verbiage gave some insight into the adage, that STARS are not like us. Not even close.

While I’m all for delving into higher states of consciousness and the study of enlightenment—the gist of their interview would denote that they have lived in an entirely different universe from the rest of us who weren’t/aren’t home-schooled, oh yea, and who aren’t able to shape-shift and CONTROL the time continuum?

While Jaden and Willow came off as sensitive and intuitive beings who speak of meditation and Prana energy (which I love!) they also seemed like braggadocio navel-gazers of their own art—exclusively. While I can agree that there is a dearth of quality music being produced these days, I whole-heartedly disagree with Willow that there isn’t anything out there worth reading?

That is blasphemous talk WILLOW SMITH!

I’ll take the interview with a grain of sea salt, knowing that it was edited up the yin yang for space, making some of their sentences seem disjointed and slightly sweeping?

While US Magazine loves to try to bridge the gap between the celebrity haves and the have-nots, I am firm in the belief that our general experiences are NOT the same, especially those at a high level of fame and Scientology ties. Yes, the Smith’s have long been rumored to have been involved in the controversial religion despite claims to the contrary—and both Jaden + Willow have been indoctrinated into the ‘curriculum’.

At the end of the day, it was refreshing to hear a different take on the modern teenage experience, ones that sounded rather intelligent and open-minded if not, slightly out of touch.

Happy Birthday to the original Cardi B of pop culture—CHARO! From her multiple appearances on The Love Boat to the Tonight Show w/Johnny Carson—CHARO personified the late 70s early 80s Zeitgeist. Happy 71st “Cuchee Cucheee!!”
Sending love to everyone today.💗 We all desperately need it 📸 @mignonettetakespictures
Happy Birthday to my favourite human on the planet @jennwiseberg. I’m currently producing a birthday collage video for you that I wlll post later—but here’s a quick message to tell you that NO ONE is funnier on this earth, no one gives “wiser,” more balanced/harsher/HONEST advice, No one at age 50 looks as gorgeous and thin (when they don’t do an ounce of exercise) and I love you with ALL my “poom poom pooms” 💗💗💗 today and forever. Happy Birthday Jenny Fay xo 😘
You won’t find these adorbs hand-made #NorthernWattKnitwear thrummed mittens on Instagram—but you will be amazed at what this PEI collective can create with pure British wool. 💜❤️❤️🧡💛💙 Makes a Great #Holiday Gift! #ShopSmall
#SOTD “I Am Woman by @emmymelimusic. 🎙🎶💗
A pinky toe dip back into mag writing courtesy of this small but mighty piece of mine on the incredible @carla.rockmore ⭐️ for @fashioncanada
Thank you 🙏🏻 @juicegirlmtl for teaching us all how to #bebetter humans. #growthmindset
Paul Thomas Anderson’s Licorice Pizza has all the nostalgia heartstring feels—complete with the late Philip Seymour Hoffman’s son playing the young lead and every DREAM cast member you can shake a stick at: from Sean Penn, Ben Stiller, Christopher Walken and even PTA’s baby mama, the inimitable Maya Rudolph. Can’t wait for what will be an INCREDIBLE soundtrack and yes, that is 1/3 of the Haim sisters Alana Haim. #WriterDirector