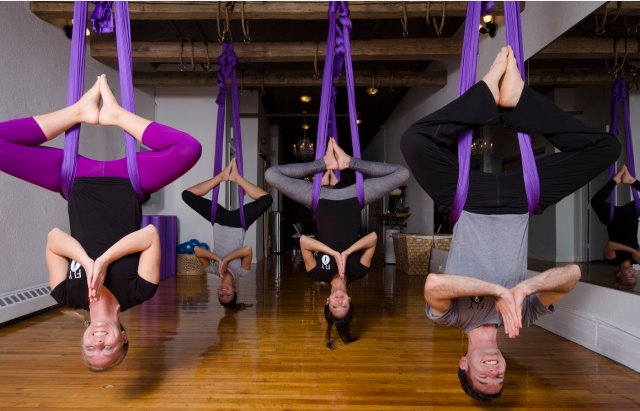 Going All Upside Down Styles at Fly Yoga!

After practicing various forms of yoga for well over a decade, when I heard about Aerial Yoga—a mixture of aerial acrobatics and Asana yoga—I knew I had to try it!

Gywneth Paltrow and Natalie Portman are fans of the practice which has a multitude of benefits, some of which are spinal decompression, lymphatic drainage, and a fuller expression of each pose with the aid of good ‘ol gravity. It’s also a highly effective all-over work out. While not exactly new—the practice is said to have started in New York in 2007, it’s a relatively novel trend in Canada.

The place, FLY STUDIO in Toronto’s downtown core of Queen West Street has been around since 2013, and was the first studio to introduce Aerial Yoga to the city!

My instructor, Ms. Ariel Whittaker-Brown—an unbelievably gorgeous and kind lass who looks like a cross between a fox and an albino fawn, talks me through some of the tenets of Aerial Yoga and answers my multitude of questions before class.

I immediately want to covet her teeny-tiny nose, but alas…the ‘silks’ await.

The purple ‘silks’ are the ultimate in an all-in-one yoga tool–eschewing the need for a strap or block. Our class of around 8 begins as we situate ourselves in front of a silk that fits our height, and we slowly open them up to resemble a trapeze.

The silks are surprisingly versatile, and soon I’m learning an entire new language of yoga that is both familiar and entirely *new* at the same time. It’s definitely an adjustment, whereby you have to learn to succumb with the knowledge that the silk can and WILL support your body weight. With the ability to support 1000 pds apiece, intellectually I understand that I’m safe, but it definitely takes some time to fully trust the feeling of being supported above the ground—even if it is only a couple of feet.

Synapses in my brain are firing off at record speed and this is a mixture of the easiest and hardest thing I’ve ever done?! Easiest because the silks allow me to get into postures and extensions that I normally would never reach on my own, and hard because it is a challenging workout that uses muscles you normally would never tap into to!

Ariel, informs me that the learning curve is about 2-3 classes. The same goes for the pain threshold…as the initial feeling of the silks tightly cutting into various body parts can be uncomfortable (especially thighs and if you are sensitive like me the underarms). Thankfully, there are modifications on every movement and as for the general yoga ethos, you go at your own pace and are encouraged to listen to your body and any limits thereof.

Did I mention the ABSOLUTE child-like fun factor? There were many moments where I giggled, or let out a playful “yee-haw” as I learned how to go all upside downsies, legs flailing until I finally learned to semi-perfect the pose at hand.

Being upside down with the blood rushing to your head has myriad benefits that are great for your heart and promote a flooding of endorphins—but like everything it does have its limits. “You should absolutely come back up when you feel like it’s too much, or if you feel dizzy” says Ariel. My personal threshold was around the 2-3 minute mark.

And while Ariel looks like a super model from any angle, for the rest of us with jowly cheek circumference, a weak chin and the gravitational *pull* of underarm breast tissue—being photographed upside down isn’t the most flattering of ‘LOOKS‘.

My natural instinct is to superimpose Beyoncé’s face on these upside down photos of myself,  however I will resist the urge to cower to my vanity and post some of my poses. *Mea Culpa, but I look like a swollen pomegranate.

Best of all, each class ends with enveloping oneself in a cocoon-like formation inside the silk. We begin first with a playful seated swing, then extending the legs for some side to side stretching before fully extending the legs and arms and preparing for Shavasana. 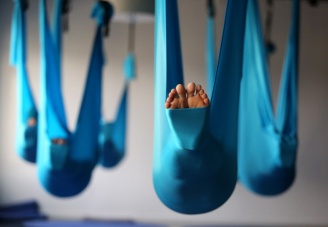 I can’t tell you how comforting and utterly natural a sensation this felt, being fully supported and swaddled above ground this way. I fell into a deep meditative state as soothing atmospheric music played in the background. I emerged from practice feeling renewed and grateful, and I encourage EVERYONE to try a class—I absolutely loved it!

See y’all in the SILKS!

Prayers for anyone that needs them 🙏🏻💗 The gorgeous vocals of @liannelahavas singing Aretha Franklin’s “Say a little prayer for you.” via @defectedrecords
Tonight at 8:30 PM EST on Clubhouse we discuss the legacy of the one and only #PRINCE with Matt Fink aka Dr Fink @mattfink1 and former Warner music A+R executive @spinaltap and other special guests! Come one come all and get ready to ask questions on #MontrealMusicology 💜💜💜 CC: @djyoc @djjojoflores
The incredible new drip sculpture work from one of my favourite artists @sopopomo as part of a 3 person exhibit for @skyegalleryaspen.
Happy Valentine’s, My Love 💗 #TrueLove
It never surprises me that those whose mission it is to bring light, healing and service to others—have gone through deep trauma themselves and have come out of the other side. You don’t get to the level of greatness of @tonyrobbins or @oprah without having a past that was filled with continued suffering. This builds character. This builds RESILIENCE. If you can overcome the pain and anger of deep trauma you will become a person of DEEP empathy for others with the ability to lead, help and heal the WORLD. This is why I don’t f**k with spoiled, privileged, basics who have lived lives of cushioning and unearned wealth—you just don’t have the greatness you *think* you’ve got. You’re not interesting. You have no texture. You have zero resilience.
When someone gives you a stellar bio introduction on @clubhouse. Good moderation is an art form and I hope all of you who joined @djjojoflores @djyoc @djmajdmtl on @joinclubhouse + myself on #MontrealMusicology last night felt they had their voices heard! On that note I have 1 Clubhouse invite to offer to the 1st person that asks. I’ve already promised my others to my amazing artist/singer/musician friend @kinniestarr and the wonderfully talented actor @justinwingswade.
How effing DOPE is @bludetiger playing bass over this Janet Jackson classic? Her playing style reminds me of 💜#Prince + Larry Graham.
Join myself + Montreal’s Old School, New School & Next Gen DJ’s @djjojoflores, @djyoc @djmajdmtl + special guests for a new @joinclubhouse group tonight at 9pm celebrating all things #MontrealMusicology 🎙🔊🎶