The last days of David Letterman’s reign on CBS’s The Late Show were tugging at my heart-strings to say the least.

Letterman had been the last vestige in appointment viewing for me—after decades of staunch viewership. I couldn’t imagine saying goodbye to such a mainstay in my life, and could not fathom late night without him.

No one, not a one touched Letterman’s unique brand of genius. Not the Golden Retriever ‘yes-person’ styling’s of  Jimmy Fallon, not Kimmel, not even Conan’s brilliance (*and he has comic genius in spades). And don’t get me started on Leno’s paint-by-numbers, mind-numbing nightly phone in.

Stephen Colbert had enormous shoes to fill, and he stepped into that time slot + the iconic Ed Sullivan theatre, and absolutely made it his OWN. 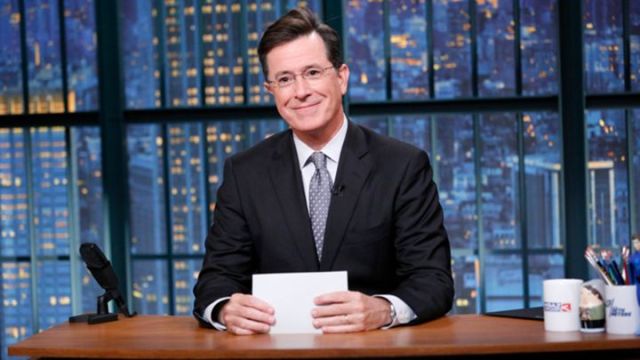 He has reinvigorated late night with an incredible VARIETY of guests, the latticework of his myriad talents—song + dance chops, he’s an ordained minister?! and comedic timing that is HEAD and SHOULDERS above anyone currently breathing on this planet. My brain feels like its been folded into intricate origami shapes after I watch each show, and that is a VERY good thing! He has disrupted the oh so lazy paradigm and rigmarole of late night guests—*bland celebrities, one after the other plugging their movies (wash, rinse, repeat) and turned it on its head.

His guests are changemakers, tastemakers, mavericks of science, politicians, tech giants, authors, dancers—and the ‘celebrities’ that he does feature, are the Rhodes Scholar stars of their field!

Even his band has brought something fresh and new to the late night stage. Band leader Jean Baptiste and Stay Human have a distinctive New Orleans sound and vibe (Ragtime, Dixieland, Jazz, Soul +++) and his musical guest choices are also out-of-the-box novelties. Sometimes its an on stage hodgepodge collaboration, as was the inaugural episode featuring Mavis Staples, my absolute favorites Alabama Shakes, Beirut and Buddy Guy. Sometimes its Stephen Colbert joining in as in the aforementioned, and most recently in a duet with Tenacious D’s lead singer (and actor) Jack Black. Last night’s performance by Judith Hill just slayed on every level.

My only complaint, the one caveat here—is Jon Batiste’s jaunty usage of that Piano Kazoo? 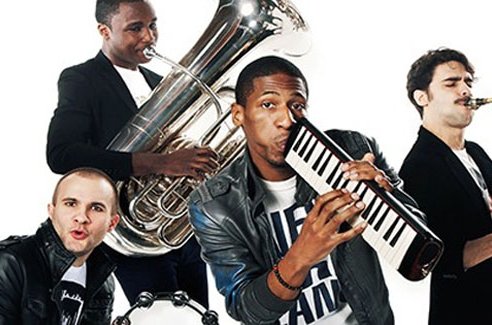 No one plays the ‘Triangle’ in an ADULT band, and no-one plays a Piano Kazoo. I have no idea what is its really called but it’s not doing anyone any favors and needs to go. Its freaking me out.

To sum up, Stephen Colbert and his coterie of writers, producers, musicians, and even his set designers have saved late night, and in effect saved us all from ourselves. I know, HEAVY stuffs.

To bringing Intelligenza back, (*to me THAT is SEXY)

One thought on “Stephen Colbert Has Saved Late Night”

Ready to ‘ring’ in the holiday gift-giving season? These @la_manso baubles are as fun as they are colourful. Order early as all of La Manso’s amazing rings come from Barcelona—“BarTHEEElowna” 💗
#SOTD “I Am Woman by @emmymelimusic. 🎙🎶💗
A pinky toe dip back into mag writing courtesy of this small but mighty piece of mine on the incredible @carla.rockmore ⭐️ for @fashioncanada
Thank you 🙏🏻 @juicegirlmtl for teaching us all how to #bebetter humans. #growthmindset
Wow. Adele dazzles on the new cover of @voguemagazine. Look out for the 1st release from Adele’s new album called “Easy on Me” which drops next Friday October 15th. #Adele #Vogue #NewMusic #InstaStyle
Paul Thomas Anderson’s Licorice Pizza has all the nostalgia heartstring feels—complete with the late Philip Seymour Hoffman’s son playing the young lead and every DREAM cast member you can shake a stick at: from Sean Penn, Ben Stiller, Christopher Walken and even PTA’s baby mama, the inimitable Maya Rudolph. Can’t wait for what will be an INCREDIBLE soundtrack and yes, that is 1/3 of the Haim sisters Alana Haim. #WriterDirector
Obsessing over honorary Montrealer @carolinevreeland as she performs “Enchanted” at a recent NY performance from her upcoming album. She will forever be a multi-hyphenated IT girl 🔥#FCF #NewMusicFriday #Music #InstaMusic
Obsessing over both @hallebailey + @chloebailey and forgot to add in this amazing pink @rodarte outfit that Halle wore to #MetGala as one of my favourites. Also loved 💗💗 the heels! #HalleBailey #Style #PinkInspo #BestDressed