This week I decided to cull the weeks *top* pop culture stories together—a couple of amuse bouches gleaned from my taste making curations, if you will.

First up, Twitter Changes Stars to Hearts and people react in a crazy cakes complainy recital!? 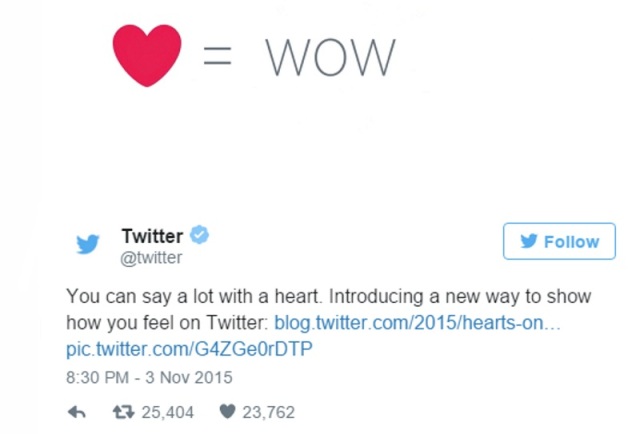 We’re a fragile sort, when it come to the comforting and familiar spaces of our online platforms—I get it.

I can recall a time when Facebook would change its design, seemingly every other month—and the result had me coming apart at the seams? “What you switched my face square to the left side? What, Uh…Who am I…Where…I Can’t…PAPA CAN YOU HEAR MEEEEEEEEEEEEEEEEE?”

Collectively were extra sensi when it comes to people moving our STUFF—even if we didn’t design the stuff to begin with, so I get the ‘discomfort factor’ to a degree.

What I didn’t expect when Twitter switched its star format to a happy heart, were the hemorrhaging homophobic slurs that were pouring in?!

Ignorant, ignoramuses! But let’s not give these foolios any more oxygen than they don’t deserve! This was actually a strategic move on behalf of the powers that be at Twitter to attract new users. The simple ipso facto is, that HEARTS are a more familiar visual cue than stars—and its the official prompt of Instagram which is leading in new users, per platform.

I had the distinct pleasure of interviewing Adele when she came out with her first album ‘19‘ in 2008.  I had a full hour with her in her hotel room (ahhhh those were the days!) and Adele came across as funny, humble, unfiltered, confident, in control of her music + production and was very weary of the ‘toxic’ fame game. After reading her latest interview in Rolling Stone it’s so nice to see she hasn’t changed any of her values after her meteoric rise to success. If anything, she seems to be an even more pronounced version of the young woman I met seven years ago. That’s why it’s it really pissed me off to read that Damon Albarn, threw Adele under the bus by calling her “insecure” and her music “middle of the road” after they attempted to collaborate together for her latest album ’25’.

Known as the lead singer for the sonic rock group Blur, I also interviewed Albarn for his animated collective straight out of a k-hole—Gorillaz back in 2006. Albarn, who was allergic to the commercial-o-meter when it came to keeping the mystery in Gorillaz in tact, was and is without a doubt a creative genius. That being said, I think his comments, towards Adele are frankly…sh**ty. Her mass appeal is because she is the last of the stand alone, big voiced TALENTS who doesn’t come with any formulaic bells & whistles.

She was farrrrrr from insecure in our interview, telling me and I quote…

Not all music has to be intricate puzzles that are so counter-culture as to alienate a wider audience?! Keep your hateful opinions to yourself, and for the record, Adele has never courted fame, nor are her lyrics and productions simple? She’s beloved because her music is INCREDIBLE. Deal with the fact that she ultimately did not want to work with YOU and your undermining BS?

Whose the insecure one now? **DROPS MIKE**

I will keep this brief as we are running long on writes, and as you know millenial eye balls start to melt if they have to read more than a paragraph that’s without the distraction of video accompaniment. Poor things.

So the wonderfully clever minds at New York Mag’s The Cut published a fun paper dolls interactive post about premiere Justin Trudeau on November 5th, which resulted in some whine-a-thons from crusty Canadians who need to take the themselves sess leriously?! They put a Canadian flag over his kibbles + bits, what is your PROBLEM people?! Please you are giving the majority of us, who find this HYSTERICAL (albeit not quite original, we did this allllll the time at Naked Eye Magazine) a bad name! Swing easy Canucks of mine—there’s nothing offensive here.

And that’s the kind of week it’s been all up in this pop culture piñata,