I thought Season 3 of GIRLS was terrible.

Yes, the show that I dripped candle wax poetry about as being the most authentic show on television felt in several cases criminally unrealistic .

I know I’m severely late on the feedback portion of this dialogue. I only watched season 3 recently in bulk/marathon styles and I realise Lena et al are KNEE-DEEP in creating Season 4—but this all still needs to be said.

Let’s talk about these four RANDOM main characters who seem to have zero roots or depth to their friendship? I no longer see the connection between any of these ladies, whatsoever? I liked the former story line of how Marnie + Hannah were drifting apart—I thought that was authentic—and yet she is brought back into Hannah’s fray as if either of them need each other?

Also who is JESSA? No really, besides having zero boundaries and dirt poor impulse control, who is this PERSON?!

The only thing about her that I can relate to is that we all have that sexual exhibitionist female friend who loves to lay on guys, on girls, loves to just cozy up seemingly anywhere, and has no hang ups with their own body or sense of personal space. That being said…the character she plays become has become full-on caricature. Some of the story arcs were preposterous? Her job at the children’s clothing store? The way she slacked off and harassed the customers into pressure buying, if and when she was paying attention? The long-lost friend who feigned her own death to get rid of her? Absurd?!

Jessa is Harem-Scarem-reckless—and I still don’t quite know why she is like this, besides the fact she had an absent father?

Her stay in ‘rehab’ seemed to be a full on parody. The other ‘patients’ were all cookie-cutter sitcom paradigms. Was it REALLY necessary for her to go down on her female rehab mate? Was that GIRLS answer to diversity?

Why were there no repercussions/discussions between her and Hannah on her return? Sure, she doesn’t ask much from Hannah, but where is the culpability? Where is the connective tissue? Why are these two women FRIENDS? TELL ME? I’m. Dying. To. Know.

Your early 20’s is when your female friendships are at an all time enmeshment. These gals are acting all mid-30’s and shit—when you take on friends that conveniently fit into your adult schedule, like mommy/baby-group friends, or chicks you do pilates with.

I ‘get’ that Hannah is somewhat of a door mat in the friendship space, but please tell me, why any of these four characters are still sharing a communal sense of reciprocal oxygen?

You had a chance to have all four of them have at it, so to speak. To have them examine the after-math of the drunken lashings that were handed out the night before at the beach-house in North Fork.

…And yet, you glossed over it the next morning. With some more choreography. It breathed of LAZY. 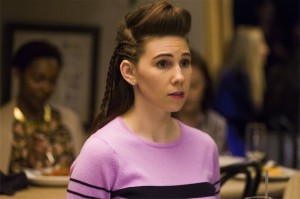 Her sing-song neurotic timbre at first was charming. But really, no-one past eleven talks that way. No-one.

Also its clear she has never had an orgasm during sex, as she is never truly in her body nor present during her sex scenes.

I think a great story arc for Shoshanna, would be to be introduced to a variety of personal ‘appliances‘ if you catch my drift. There are myriad sure-fire methods that someone like Shoshanna needs. Perhaps her vocal hysterics will abate? Actually, I think it would be a great ‘excuse’ and/or panacea for her to calm the eff down.

No really. He no longer belongs here. He looks about 43 and he is utterly joyless.

This is not *F*R*I*E*N*D*S—he is not resigned to playing the resident GUNTHER at the coffee shop that none of the characters have any reason to visit. His story arc has reached its apogee. It can be a work-related Java accident!

*Also he may have murdered Hannah’s boss (another story arc that was disjointed + left me with a hundred questions) after they got into that weird bar fight. Yes, he must be eradicated.

Last complaint. Correct me if I am wrong. But I recall what felt like an earnest former quote of yours dear Lena, to keep the guest stars or celebrities to a minimum—like the way I make everyone promise me there will be no math? I believe this was a promise of yours fairly early on, to give lessor known actors a chance. Season 3 was overflowing with celebrity spots? The ones that were incredible were Richard E Grant who played Jaspar the manic codependent accomplice to Jessa’s drug-addled spiral. And while it’s implausible to picture Gaby Hoffman as anything but the adorable kid from Uncle Buck—her role as Adam’s crazy-cakes sister ‘Caroline’ was fun to watch—even if her character is better-suited for the Groundlings stage.

Perhaps I’m being to harsh and these aren’t exactly A-list celebrities that you are casting. Also it needs to be said that Gaby Hoffman had a pretty difficult year in 2013 so giving an old friend a gig was really commendable. I don’t see why you needed to cast Amy Schumer in the first episode—she has her own hit show, and that Felicity Jones intervention story-line was unwatchable. Was she wearing a set of rabbit-teeth?

The good news here is that both Hannah’s + Adam’s characters are still the paste that keeps the papier-mâché of GIRLS all artsy-craftsy. In other words…I like what you’ve done with the place.

Both Characters Were True to Themselves…

And even though I would never befriend anyone like perfect-patty-controlling Marnie in real-life, I think you’ve given her character tons of great scenarios to chew on in Season 3. I did feel ever so slightly ripped off that she was abandoned by her ex in a story arc that we never got to see? Surely we deserved a soft-focus flash black sequence at the very minimum?

For season 4, I foresee that dreamy Desi and Marnie are going to finally get together. She will fall madly and deeply in love with him. She’s going to change the way she dresses and talks, and turn her whole life around to accommodate his ‘busy actor’ schedule. She is going to lose herself in him and bore (new!) friends by talking incessantly about how “talented he is“.

He’s going to teach her about music and literature and they’re going to have crazy Tantric Sex and then he’ll eventually turn on her, tell her she doesn’t understand/respect his “art,” go back to his ex and Marnie will be forever ruined. Its going to be fantastic!

The best teeth in the biz!

*As a side-bar; where can I procure a set of actress Allison Williams fine dental-ware? They are like perfect tiny stucco buildings. Please don’t tell me they are natural? That is sooooo something Marnie would say.

And after all is said and done, the final story arc that Jessa was involved in with that older artist was gripping. It almost made up for the first nine episodes. I am curious to see how that all plays out.

To that end, it goes without saying that I can’t even imagine how difficult it is to write, produce and star in your own show Lena? So please don’t take any of this personally. I just hope that Season 4 ties up these loose ends and adds that initial spark of reality back that made GIRLS shine so bright. These characters aren’t all bound to one another. This is HBO, not a confined sitcom space where all characters must remain together, forever? Go rogue like that Game of Thrones director. At the very least, introduce some new female friends? This is not a foursome that makes any sense, any longer.

I have faith Lena Dunham,

Ready to ‘ring’ in the holiday gift-giving season? These @la_manso baubles are as fun as they are colourful. Order early as all of La Manso’s amazing rings come from Barcelona—“BarTHEEElowna” 💗
#SOTD “I Am Woman by @emmymelimusic. 🎙🎶💗
A pinky toe dip back into mag writing courtesy of this small but mighty piece of mine on the incredible @carla.rockmore ⭐️ for @fashioncanada
Thank you 🙏🏻 @juicegirlmtl for teaching us all how to #bebetter humans. #growthmindset
Wow. Adele dazzles on the new cover of @voguemagazine. Look out for the 1st release from Adele’s new album called “Easy on Me” which drops next Friday October 15th. #Adele #Vogue #NewMusic #InstaStyle
Paul Thomas Anderson’s Licorice Pizza has all the nostalgia heartstring feels—complete with the late Philip Seymour Hoffman’s son playing the young lead and every DREAM cast member you can shake a stick at: from Sean Penn, Ben Stiller, Christopher Walken and even PTA’s baby mama, the inimitable Maya Rudolph. Can’t wait for what will be an INCREDIBLE soundtrack and yes, that is 1/3 of the Haim sisters Alana Haim. #WriterDirector
Obsessing over honorary Montrealer @carolinevreeland as she performs “Enchanted” at a recent NY performance from her upcoming album. She will forever be a multi-hyphenated IT girl 🔥#FCF #NewMusicFriday #Music #InstaMusic
Obsessing over both @hallebailey + @chloebailey and forgot to add in this amazing pink @rodarte outfit that Halle wore to #MetGala as one of my favourites. Also loved 💗💗 the heels! #HalleBailey #Style #PinkInspo #BestDressed