I recently stopped following Oprah—and not because I don’t love + adore the ground she walks on, but because there’s something about following someone THAT famous via social media that feels like fawning adulation bordering on idolatry. I’m also not about hinging on the bon mots of those who may or may not even write their own tweets.

In fact, it could be said that I mainly follow writers + comedians. The few musicians I follow return the favor—barring Prince, and that’s perfectly acceptable…because, uhm…Hullllooooo it’s P-R-I-N-C-E?!

Others are a confetti of humans that I actually know, humans I’d like to know, or brands I admire—and ‘yes’ Grumpy Cat is a BRAND thankewww!

I also follow a host of illuminated thinkers, teachers and healers on Twitter of whom, it could be argued, are ‘celebrities‘—but in my minds eye are simply people who possess the kind of brain space that I’d simply like to bathe in.

One of them is Lena Dunham. Actress, Writer, Filmmaker, Creator and Producer of the HBO series GIRLS.

What truly draws me to her is her pursuit of authenticity—warts and all. Anyone who risks exposing their vulnerabilities for the sake of their art automatically wins a parking spot in my heart.

She’s brilliantly funny, possesses a wicked vocabulary from which I steal word-play from on the regular, and she shines an exceptionally accurate light on the inner crazies of females.

So last week Dave Letterman announced his forthcoming retirement from CBS in 2015.  After a healthy marathon cry and some Toll House cookies, I saw that Lena Dunham had made mention about it—specifically something about how she would miss his “gorgeous tooth scenario/general brilliance.”

Obvi will miss Letterman and his gorgeous tooth scenario/general brilliance

I was so happy to hear her say this (and not at all surprised!) as just a month prior, a very popular 20-something Toronto blogger made a comment questioning the relevancy of Letterman.

“How is David Letterman still even a thing?“—20-something blogger

…I almost *fainted* at the mere sight of such a clearly ageist remark?It made me sad to think that said bloggers harem of 30k followers might think the same. Heaven forbid someone is not on a 30 under 30 list and it’s as if they cease to exist in this culture?!

“Letterman is an intellectual and comedy LINEBACKER,” I lambasted her. “He’s an icon who paved the way for the Conan’s…your Kimmel’s and Fallon’s!!!”

So back to Lena. I had written her back expressing my appreciation for someone of her stature giving a kind nod to someone as timeless as Letterman and gave her some back story on my horror re: the influential blogger scenario.

Not that I should make Dunham feel responsible for the misgivings of her 20-something half-baked peers. She’s far from your typical young woman in every sense of the word.

Dunham was going to Lilith Fair as pre-tween with her mom, writing scripts and making films before she could vote. She has admitted that she had never actually been clubbing before she shot that infamous cocaine/switcheroo top scene in season two of GIRLS, and her idea of vacationing is reading the translated versions of Madame Bovary in a well shaded area. She’s kind of like in her early 60’s when you think about it?

And then I sent her this…

@lenadunham Also I would add that he is irreplaceable. I cannot even fathom late night without him.

… and to my absolute pleasure she retweeted it. Even though it was a part deux to what I had previously sent her—my disjointed comment got a retweet! 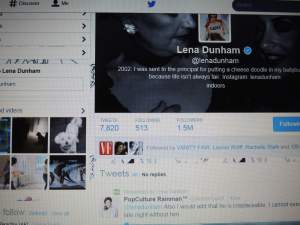 I don’t write to Lena often—but when I have, she has often been kind enough to either respond or favorite a comment. For the record, Lena does not follow me and we have never met.

So she retweeted me and almost immediately I started getting new followers. It was fantastic! This was a bona fide Twitter windfall as a retweet from Lena Dunham is the ultimate cool factor endorsement! I was already up to 10 new followers! I think maybe her 1.51 million followers think the she and I are friends! AWESOME! 10 more followers, and I’m being retweeted and favorited all up this mutha!

I began to wonder if celebrities are even aware of how their retweeting influence impacts their retweetee’s or if they simply do it by rote, like everyone else? It dawned on me that the entire phenomenon would make an incredibly fascinating if not short-lived reality series.

After receiving 30 shiny brand new followers I began to feel guilty like I should write a thank you note, or send one of those edible fruit baskets? 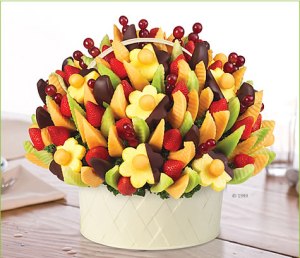 I was purposely riding this wave by not tweeting anything new, waiting to see how long I could squeeze this fortunate series of events for all it was worth while trying to play it cool. Like, ‘yea…people like Lena Dunham retweet’s me all the time…so what?’ I didn’t want to write a public thanks because I didn’t want to be seen as a slushy fan to her followers and I didn’t want her to think I’m a starstruck nerd whose using her for follows? In fact I noticed how other plebes were almost using my retweet and or my statement as a piggy back of sorts to get themselves noticed.

I caved about an hour later and inked a tweet saying thanks to Lena and attached the actual photo of the retweet as seen above. Eventually she removed my comment from her page, as it was possibly annoying the fuck out of her how many people were commenting on it, or she got turned off by my inability to not draw attention to it. Perhaps there was no thought placed into the removal at all and I have suckled on the teats of Lena Dunham and milked this incident for all it is worth and should really just move on.

No, I’m not yet the Twitelebrity that I’m destined to become, but this was a lovely lil’ feather in my cap! Final tally was around 40 of which half have deserted my ass after realising that I am not in fact part of Lena’s inner circle.

Just discovered @teddyswims404 last-night thanks to @lauren_wise_author_page and I am BLOWN away! Holy F**k Knuckles this man could sing the telephone book (if they even still existed) and make it sound out of this WORLD! #TeddySwims #TheVoice #OMG #Wow #Music #Singer #Covers #DontStopBelieving #UseSomebody #Music #Artist #Country #Soul
Make your Monday workday great—whether you work at the office, #WFH or the rice fields in Tibet. Amazing Biggie “Hypnotize” Dance via @eggs.tyrone
Helping someone else is a blessing to YOU. It’s up to the person to do the real inner work but you can help someone in need—with an ear to help them feel seen and help them get back on their feet. Life is a wheel, ups and downs are a part of life. #ISeeYou #MentalHealth #GivingisABlessing #Bless #Blessing #Blessings #TearsAreHealing #LiftUp #LiftUpOthers #Writer #Twitter #QOTD #Friendship #Sisterhood #Tweets #MyWords #Words #MyWriting #MyWrites #VulnerabilityIsStrength #ShowUp #Love #Giving
7 years ago today I met the wonderful #AdrianGrenier for a piece I co wrote in @hellocanadamag. A really great guy who truly cares about #Eco matters + saving our #Oceans. #EcoConscious #Green #Actor #Sustainability #Media #Entourage #DavidBitton #BuffaloJeans #Toronto #TDOT #TO
#ThrowbackThursday. Supermodel #NadjaAuermann truly is/was 1 face with my mom in her youth minus le nez. #TBT #Supermodel #90sSupermodels #90sSupermodel #80s #90s #BlueEyes #PopCulture
Every day is a good day for @harrystyles music and dance stylings of @nobodysausage. #HarryStyles #Stylers #InstaDance #DanceitOut #PopDance #Dance
Happy 34th anniversary for one of #Prince’s most dynamic albums #LoveSexy which boasted such tracks as #IWishYouHeaven #AlphabetStreet and my favourite #GlamSlam. Check out my stories for some choreo inspo from my favourite dancer of all time #CAT. #Prince #PrinceArmy #PurplePeople #Choreography #DanceInspo #POPLIFE 💜💜💜 #Legend #Icon #Goat #THEGOAT #Purple #PurpleHearts #MusicNews #MusicJourno #MusicBlogger #MusicLover #MusicIsLife
Black & White Me.