I get a lot of people complimenting me about my Gif shown on the right hand side of my home page of the adorable little dancer ‘poppin & lockin’ aka doing the ‘Electric Boogaloo.’

The boy’s name is Miles Brown aka “Baby Boogaloo” and the Gif comes from the 2011 music video by London soul singer Aloe Blacc. Check out his incredible moves in full below. He first shows up at the 0:55 mark.

This video was made in 2009 when Miles was Four during a one-time appearance at City Walk in Los Angeles. The control he has over his body movements are pretty awe-inspiring. *That’s his father in the background–Jack Brown, also a musician and dancer.

His star stature really took off when he appeared on Ellen in that same year, and then at the age of Five when he competed on America’s Got Talent as part of a break dancing duo called Future Funk.

Since America’s Got Talent (No, they didn’t win) Baby Boogaloo has appeared in a variety of music videos and in several dancing competitions.

The sky is the limit for this young talent and you can follow his budding career on his Twitter @mrbabyboogaloo. 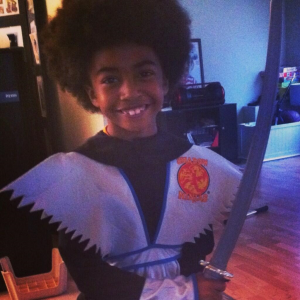 Baby Boogaloo is all growns up! Seen here on Halloween 2013.

I hope he knows he will be my forever ‘dancing machine’ official mascot and that I would LOVE to thrown down with him one of these days. Once upon a time, I really knew my way around the dance floor–and I think I still *GOT* it!