Mea Culps as I was away on Fakecation. Several in fact.

But enough about moi, because my favorite time of year is upon us…

Yes it’s fall, the most substantial fashion-procuring-season of the year.

I don’t know about you, but ‘Winter-Fashion’ is a mammoth oxymoron in my humble opinion. I end up looking like the late Robin Williams in The Fisher King just trying to survive the harsh elements. And in summer? I’m pretty much bra-less with a sweaty upper lip area. How fashion fits into that sexy mess is a mystery to me?

…So for your UNISEX pleasure I bring you Fall Fashion Trends for both Guys + Dolls.

N.B. There are no choices with fur in any of my offerings because I find it grotesque and cruel, oh and this.

Shopping for you dudes was a difficult task as the majority of runway ‘looks‘ were like one big glittery Liberace carnival-float (not that there’s anything wrong with that…) However it’s not exactly what I could see my own man wearing, let alone my beloved readers. So, I cherry-picked some looks that I believe will appeal to a wide array of taste buds, while remaining on trend.

Orange is the New Black

Orange as a color palette is huge for menswear Fall 2014. To simplify, I plucked a couple of wearable looks for you to choose from. From Left to Right DSQAURED Quilted Bomber Jacket, Strellson Zinc Cotton Pants, Gucci Running Shoes. 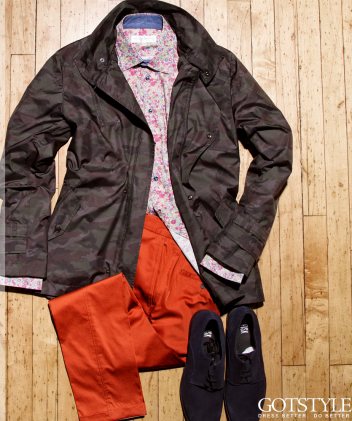 Personally I wouldn’t be caught dead wearing this vomitus carrot garbage, but don’t blame the messenger! Hint: get 1 statement piece, like a staple jacket for example. Like Tim Gunn says: “Make it Work People!”

The latest bags for fall 2014 are sizable boxy carry-on’s in bold colored prints and fabrics. DSQUARED showed off some great bags at their runway show as did Etro and Burberry Prorsum. 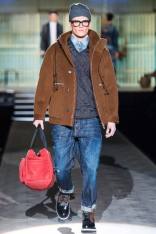 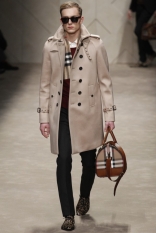 Might I also add that j’adore the entire DSQAURED ‘look’ from head to toe? How hawt are those incredible shoes?! *Click onto photo for magnified view.

…Speaking of shoes (+ awful segues) Designer running shoes are all la RAGE and I couldn’t help but become enraptured with these Balenciaga stunners + these Tom Ford red velvet high-tops. 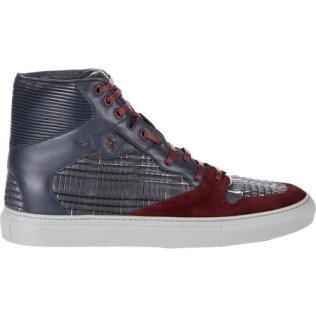 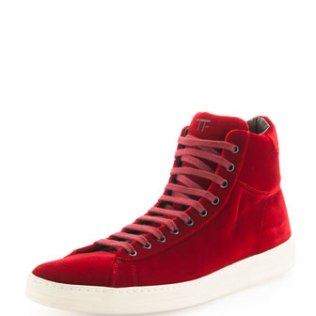 Did Somebody say Velvet? (See what I did there?)

Beyond being cruelty-free, velvet is a playful textured fabric and was seen all over the runways for fall 2014. Vibrant colors, pinstripes and patterns took center-stage courtesy of dandy-esque suits via Dolce + Gabbana and Etro.

As a footnote, I’m not a huge fan of the resurgence of the double-breasted suit as I don’t think it does anyone any favors. 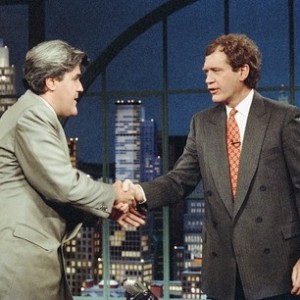 Like the title suggest, think Clock Work Orange meets well-worn Biker Boots and you have Fall 2014 strongest trend of all. 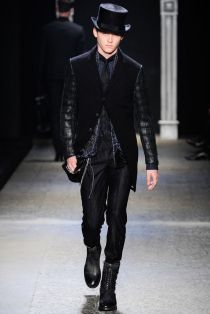 John Varvatos pretty much cornered the market in his runway fall show depicting a Rock-Star/Draconian aesthetic with boots worthy of a modern-day rough and tumble. (I don’t even know what that means?)

So there you have it GUYS. A little piece of my fashion doyen-ism just for you.

Most importantly the paramount FALL 2014 non-negotiable is to shave off your HIPSTER BEARDS for GOOD.

No-one wants to see anymore of that nonsense…DEAL?

Just to reiterate, I won’t be showing any fur options despite there being an onslaught of it on the runways for fall 2014. Fur is for animals, NOT for people. Repeat 10x fast: Fur is a Faux-Pas!

As an evangelist for all things colorful, I was pleased to see a smattering of gorgeous prints on the runways. 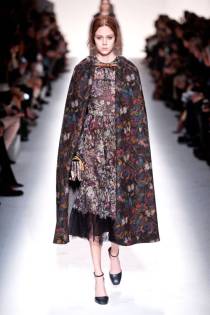 Might I add that the ENTIRE Temperly London pre-fall collection (I actually prefer it to the winter collection) expressed the inner landscape of my fashion sensibilities better than anything I’ve seen in recent years? Alice Temperly is a tour-de-force!

The sheer trend was also prominent on the runway with peek-a-boo ethereal elegance via Givenchy, Michael Kors + Roberto Cavalli.

The head-to-gams knit trend appeals to my need to be swaddled in absolute comfort while staying bra-less  for as long as I possibly can. I would happily dress like this exclusively until I’m forced into my mismatched heinous winter ‘drobe. From left to right: Marc Jacobs, cruelty-free designer Stella McCartney + Michael Kors. 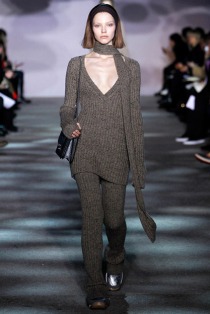 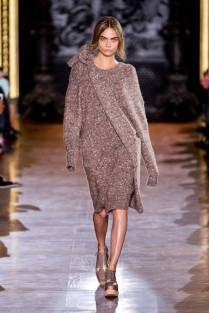 While the braided hair trend is not au courant per se, the Golidlocks powers-that-be kept on pushing their creations to new levels. First up, all hail to Nanette Lapore for creating a variety of braided looks that truly took over her Fall 2014 runway show. Tight French braids that hug the forehead and cascade down the side of the face, tucked underneath, or with a Mad Max meets Pocahontas flair with pinches of hair peeking out. All of these looks are highly covetable, wearable and dripping with mah-jah style! 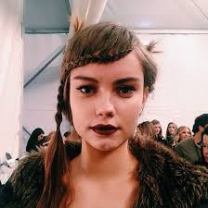 Additional lovely was seen in a romantic incarnations of ‘bun-braids’ at Dolce + Gabbana and sleek hair-origami at Fendi. 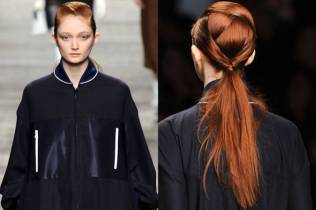 Incandescent metallics, glittery pigments+ gun metals are the signature look for eyes, lips + nails for fall 2014. Sweeps of silver at Emporio Armani + Mac, while Chanel adds a pop of color to further enhance the trend. 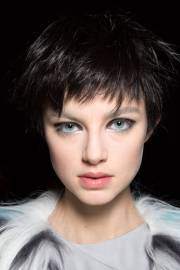 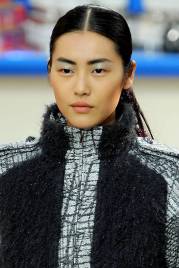 Up Close inspirations with a Black Swan *feel* left at Chanel right at Dior. 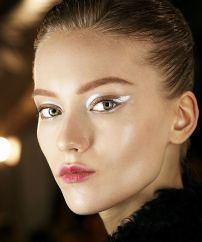 Furthermore, I am absolutely head-ovah-heels for this entire ‘LEWK’ from Rodarte Fall 2014, curated by François Nars. 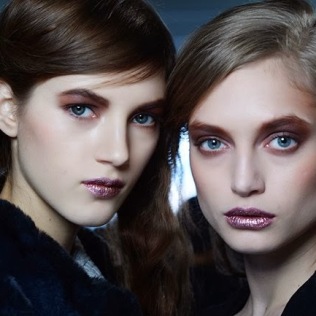 I’m purrrrrrrrrrring over the 80’s inspired brownish-copper eye shadows that they built up into the eyebrow and the severe cheeks. The lips which make me buckle at the knee are a combination of Nars new Audacious Lipstick line (out fall 2014) + a rainbow confection of actual glitter.

James Kaliardos for NARS Cosmetics did a professional version of a glitter-lip for the runway. He mixed four different colors of loose glitter (silver, red, pink, and lavender) with either NARS Audacious Dominique Lipstick for the lighter ‘lewk’ or Audacious Deborah for the darker version.

Oh hey Nars? Could you not come out with an all-in-one-version? The last time I created DIY makeup, it was with the craptastic kit known as Fresh n’ Fancy™? The homogeny of questionable synthetics, beakers + funnels?

The DIY kit for Every 80’s Tween

Glitter is messy, and I fear my cat might find and choke on this melee of unicorn vomit and ruin what should be an amazing lipstick moment for me? At the very least, think about making a glossy-glitter adjunct for the market place?

…And finally the metallic trend is the statement nail trend this fall, not to be confused with Grandma’s pearlescent nail-sexy. Mix it up by trying a variety of colors, play around with an inverted French manicure or straight shooting metallic silver. The trick is to keep your nails short + sheik!

Now take all you’ve learned here and spread it around like fashion confetti! And if you see me at a TIFF party with glitter on my teeth or swirling around in my DRANK, its because like you, I’m just trying my best to stay on trend—Damn you NARS!

Who will be at the ALL Canadian pared down version of @osheaga next weekend? 🎶 #CharlotteCardin #Stars #JessieReyez #AllanRayman #CanadianMusic #Montreal #MTL #514 #The6 #Toronto #Music #Osheaga #Lit #Canada #NMF #MusicNews #CanadianConcert #HalfMoonRun #MusicPR #MusicManager #Canadian #MusicBlogger #InstaMusic #MusicConcert #MontrealMusic #InConcert #MusicNews #MontrealMoments #TorontoMusic #MusicPromo
Obsessing over honorary Montrealer @carolinevreeland as she performs “Enchanted” at a recent NY performance from her upcoming album. She will forever be a multi-hyphenated IT girl 🔥#FCF #NewMusicFriday #Music #InstaMusic
Art. Love @hellemardahl’s work. 🍬
Must see TV for my “Shut-in Girl Autumn!”🍂
Obsessing over both @hallebailey + @chloebailey and forgot to add in this amazing pink @rodarte outfit that Halle wore to #MetGala as one of my favourites. Also loved 💗💗 the heels! #HalleBailey #Style #PinkInspo #BestDressed
On repeat: @chloebailey #HaveMercy 🎶 🔥🔥 #NowPlaying
My grapevines bring all the boys to the yard…’and they’re like’— *the* most delicious Concord wine 🍷 grapes 🍇 you’ve ever tasted! 😋
…I’d like to think Bob Ross could have painted many a happy little pandemic shut in’s. 🎨