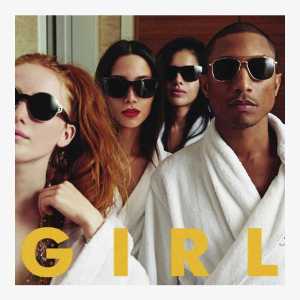 I was super excited to review Pharrell Williams new album GIRL [Columbia] for a multitude of raison d’être’s.

Wayyyy before Blurred Lines and his GORGEOUS collabs with Daft Punk, I was a long time fan girl of Williams reaching back to his production work with partner Chad Hugo from the late 90’s. ‘The Neptunes’ produced some of the greatest tracks in in R&B + Hip Hop history—a few ultimate stand outs being Britney Spears’s Slave For You, Jay Z’s I Just Want to Love You (where you can hear Pharrell on the chorus), Clipse’s When The Last Time (he also makes a cameo) Justin Timberlake’s solo debut Like I Love You and Nelly’s club monster Hot in Herre. Like no other production team before them, each track had that distinct Neptunes *feel*—the unique beats being the show case for each and every song.

In 2001 along with Hugo and childhood friend Shay Haley, Williams group N.E.R.D. (No-one Ever Really Dies) released their first of four albums In Search Of… 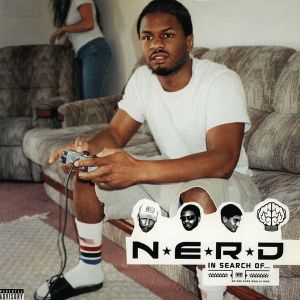 To this day it is one of my favorite albums of all time—emphasis on the album—as it was a collection of tracks that begged to be listened to in its richly, hi-fi lo-fi experimental entirety.

But back to present day and last weeks offering of Williams second solo album GIRL.

His first release Happy—a song that LITERALLY changes the molecules in the brain into mini bursts of  endorphin bubbles—was the feel-good opus of early spring 2014.

A breath mint with a battery, this song is impossible to sit still to and quite simply, the most joyful song I have heard in years.

And perhaps this, coupled with his extraordinary last year (Blurred Lines, Grammy’s for Daft Punk’s Get Lucky, Oscar nom for Happy) is why I expected more from this album.

Like with most things, repeated listens and marinating allows for one to pick up on nuances that don’t register upon first echo, and all of the productions themselves—cross pollinations of musical styles and beats are really well done.

That being said I really like four other songs on the album and don’t care for the remaining five. The #1 Happy was already produced for Despicable Me 2‘s soundtrack and was simply ‘added’ to this solo album. Williams has even alluded to the fact that it was a ‘cash grab’ idea from Columbia to make a solo album after the exceptional year he had, and that on his own he may not have elected to do it.

I like Marilyn Monroe—a 70’s themed pop symphony complete with dramatic violin hooks and plucks courtesy of Hans Zimmer. I actually couldn’t help envisioning roller skating to this song on one of those old school circular tracks. I was quite the boogie-woogie roller babe in the 80’s. *I probably shouldn’t brag about that.

I like Brand New the duet with Justin Timberlake—but felt like it sounded exactly like something that would have come off of Timberlake’s former 20/20 Experience-–i.e; slightly derivative…but no less enjoyable.

Come Get it Bae is a fun and infectious happy-clappy step-dancing hoedown of sorts that features his Bangerz client, l’enfant terrible Miley Cyrus.

Gust of Wind is a breezy danceable track that is helped along by Daft Punk and is sure to be a huge summer car cruisin’ fave.

Songs that are collectively whiny, annoying and repetitive are It Girl, Hunter and Lost Queen—the latterwhich feels like a nursery rhyme.  With repeated plays Hunter becomes far more interesting than I had first given it credit for with nuances + inflections of Blondie’s Rapture, glosses of vintage Jagger and even Carole Pope.

Gush is neither here nor there. I don’t love it nor hate it but wouldn’t necessarily play repeat either. It drips vintage Michael Jackson + El Debarge and that, right there is always a good thing.

Lastly, Who You Are is a duet with Alicia Keys that feels completely disjointed. I wouldn’t be surprised if they laid down the tracks separately as it feels like they are worlds apart in this forgettable song—despite Keys perfect pitch raspy-sweet vocals.

So in the end, 5 outta 10 is for me worth the price of admission—but you may not agree on those kinds of odds. In this case, GIRL *is* made for single cherry picks on iTunes despite it being touted as a concept album—something which I didn’t clock into at all.

GIRL is not the hit-factory that one would come to expect from Williams—and ahhh there’s the rub. A huge part of his wheel house is making chart toppers for ‘others‘…like the upcoming lead single for the Superman 2 soundtrack  “It’s On Again” that he co-wrote and produced. Between his charity initiatives, his clothing line and his mammoth repertoire of musical work, perhaps the release of this solo album could have been better executed…or perhaps he should have saved some hits for himself instead of giving them all away to clients. No-one can have it all…and this album is representative of an artist who has spread himself too thin, unfortunately.

One thing that cannot be disputed is that Pharrell Williams is an über talented maverick who is never the same note twice. I’m so indebted for his longstanding contributions to the industry and hope he continues to inspire and shake up the current climate of music for decades to come.