Athough I’ve been a published writer for over fifteen years I’ve only recently become hip to the blogger scene. First as an exclusive contributor for the Huffington Post and in the last 6 month’s on my personal blog The Pop Culture Rainman.

In an era where it is *encouraged to spill ones own digital ink* throughout social media, writers—-› especially funny ones, have become super forces on the web.

One of the largest communities and resources for bloggers is the American site BlogHer.com which boasts an online community of 92 million. BlogHer also hosts several niche and one mammoth conference, where I’ve been told the totem pole of online famedome looms large–hierarchy ‘tude included. 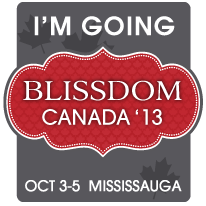 Blissful Thinking
In it’s fourth year, Blissdom Canada brands itself as Canada’s Premier Social Media/Blogging/PR Conference. With around 500 attendees from all over the country, Blissdom sets itself apart as a ‘kinder, gentler’ conference (how so very Canadian!) with the marrow to *inspire,* *connect,* and *teach.*
“This year we were very intentional that everyone [feel] at home,” said Shannon Mischuk co-principal at Blissdom Canada. “We want everyone to be conscious of their words and give everybody a chance to use their voice. Numbers don’t matter to us, it’s all about the conversations that take place”.
Being a blogger conference neophyte, I was excited to immerse myself in the culture, meet some like-minded individuals, and connect with some great Canadian brands. The setting was the Delta Meadowvale in Mississauga and although it’s a 3 day affair, I strictly attended Friday’s all day agenda starting at 8am.
Upon arrival I run into 10-year old blogger Hannah Alper in the lobby of the hotel, daughter of Twitter herculean musicologist, Eric Alper.
“I want to help the world and promote causes I believe in, like the environment and social action” said Hannah not forgetting to promote herself as an official We Day and Free the Children speaker.

Hannah Alper: Her Future’s So Bright *WE* Gotta Wear Shades!

Erm, Holy Impressive?!  I just stood there inhaling in her adultness and poise.
I do believe I was almost *exclusively* making my Barbie’s hump each other at her age and shame washes over me.
***
Mommy Bloggers Oh My!
A trend is taking shape; most of the women I am meeting overwhelmingly identify as ‘Mommy Bloggers’ in various permutations.
There were The Mompraneurs, The Yummy Mummies, The Outspoken Blunt Moms, The Karate Moms, The Happy Clappy Perfectly Positive Mommy’s, The ‘Can We Talk’ Mommy’s, The Wine Mommy’s, The-This-is-Why-We-Drink-Mommy’s, The Bacon Mommy’s (ok, I made that one up) the Glam Mommy’s and the Yoga/Pilates Mommies. (BDB ‘Big Deep Breath’!) 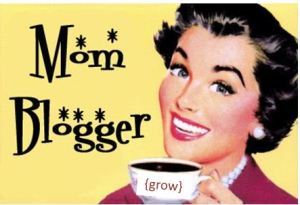 Even though I’m not a mom myself, I get the ‘sisterhood’ of it all, and I understand the large draw to these kinds of events. The Mommy Blogger revolution began from the reality that many new moms feel isolated and overwhelmed and it was a way to initially share tips, stymie loneliness and curate community. From speaking to some of these women, many are ‘desperate‘ for a night or weekend away to connect with their friends and learn about their craft.
Of course not all ‘Mommy Bloggers’ simply write about runny noses and eco-diapers, while many eschew the term itself as it can sound quite condescending and limiting.
I’m not trying to devalue or mock Mommy Bloggers, the fact is, most of the women I met at Blissdom owned this term in their titles and branding platforms. I would never insinuate that it is all they are. I mean at the core we are all writers trying to express ourselves creatively right?
Perhaps it says more about me than anything that I felt stifled by the overwhelming atmosphere of Mommy Bloggers. Hmm..projection much Ms Gold? (Fertility Woes Ovah Here!)
*Might I add, most were lovely and as kind as can be while ONLY one or two appeared to have swallowed their own vomit in my presence?
***
Breakout Sessions
The informational workshop sessions at Blissdom were broken up into three categories; Work, Create & Change–all aspects of our existence that “need to be fed” according to Mischuk.
The first one I sat in on went under the umbrella of ‘Create’ titled Blog to Book and was hosted by Julie Van Rosendaal and Caroline Fernandez–both published authors. 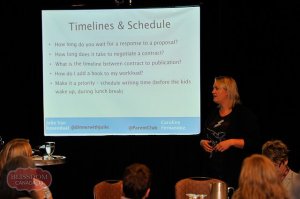 Rosendall (pictured above) is a food author, and Fernandez writes about parenting and hashtags herself on Twitter as the co-creator of #ZombieMoms (add another one to the list!)  They offered up a lot of practical advice and I found Rosendall’s delivery to be both comical and frankly, ‘adorable.’
My second session fell under the ‘Work’ moniker titled “How to Carry on with Your Business When Everyone Thinks Your are Crazy. The Speaker was FreshBooks CEO Mike McDermot who was being interviewed by the Yummy Mummy herself, Erica Ehm.
First off, like most women above the age of 30, I have some really warm and fuzzy feelings when it comes to Erica Ehm. I grew up watching her on Much Music and it was my early life’s dream to become a VJ or become involved in the music industry which I managed to somehow pull off (just not the throwing to music videos kind). Everytime I see her she is affable and warm, and I have to constantly remind myself that we aren’t related as the familiarity of her face is that powerful.
McDermot spoke passionately about entrepreneurship and the free-fall that one must take to start a business as opposed to simply taking a job. “It’s like living in the wilderness, being naked, alone with no food in sight,” he said matter-of-factly explaining that the risk eventually leads to rewards, even if one isn’t immediately successful. My synapses were highly sparked by his wisdom and message.
***
At this point I went to check out some of the media partners and brands that sponsored Blissdom. Erica Diamond a successful blogger recently told me that connecting with brands at these kinds of conferences is always her main goal. 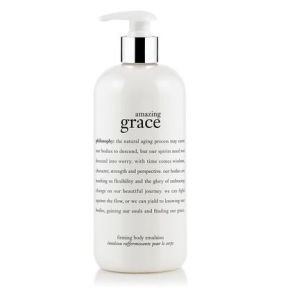 I was pleased to see that the cosmetic line Philosophy was a sponsor and I thought it was a good fit for Blissdom in terms of brand messaging and their ethos of “celebrating the human spirit“.  Being that scent is so tightly tied to memory, I found myself slathering on the amazing grace line of moisturizer as I used to wear the perfume and I had forgotten how much I loved the feminine fragrance.

Another sponsor that made quite an impact was Cottonelle and their latest #LetsTalkBums campaign. In a nutshell, they’ve devised a 2 in 1 ‘system’ that we have been forever using on babies but never on our adult selves? Wet wipes for our nether regions that are safely flushable and a plushier toilet paper (it feels like a quilted couch!) to finish up the job!
While far from innovative (remember actor Terrance Howards 2007 comment?) it is truly BRILLIANT! All I can say is…What Took Us So Long?
I then ventured off to the ‘Style Lounge’ to find one of my favorite companies from Toronto Rent, Frock & Repeat–a designer dress rental outfit that I am obsessed with! I then got beautified and ‘got my’ hair did by the gals from The Beauty Team–an A-List collective of make-up artists, hairdressers and everything in between!

The Beauty Team Working Their Magic!

The house was packed in anticipation of hearing Kirstine Stewart, head of Twitter Canada speak. I was struck by how absolutely beautiful she is in person, her hair pulled back like Carolyn Bessette-Kennedy, and sporting a pair of bright orange slacks (I sound like my mother) that might look hideous on anyone else, and yet was absolute perfection on her. She showed a pre-packaged reel about the inception of Twitter that was both moving and inspiring, spoke a bit about some of the metrics and reach that the platform enables, answered a couple of questions and WHOOSH–she was gone. Point blank: it was way too curt of a keynote & felt rushed. She should have been scheduled for at least 45 minutes to an hour, if only to be asked by moi about how she handles people constantly bastardizing her name? Kirstin, Kristen, Kristine…?
***
Social Etiquette Workshop

This was an eye-opening panel about the personal footprints we make on social media, and the impact that they make on others.  Moderated by Dadditudes founder Neil Hedley, it was an interesting mix (if not slightly disjointed) from all echelons discussing their personal stories and outlooks. Glenn Canning, the father of Rehtaeh Parsons the Nova Scotia teenager who committed suicide after a gang rape and months of bullying, was the most sobering of all the guests. The pulse of the room was palpably changed as he took the stage. This man and his family have suffered greatly, but what is more disturbing is that his late daughter still continues to be the victim of online bullying posthumously.  His story aside, some of the content was overly preachy, even though it was cloaked in the best of intentions. I believe in kindness, and positivity, and choosing ones words carefully, but there are shades of grey especially for those whose brands are slightly different from the bulk of attendees at Blissdom. I’m a huge follower of comedians on Twitter. The majority of the ones I follow, are rather brilliant in their output, but it doesn’t always mean that they are perfectly PC in all of their material. Again, I look for honesty and a good laugh in Tweets, and they aren’t always tied up in a precious kindness bow.
There’s a difference between being opinionated or comical as opposed to being outright evil. I am not a nun when it comes to my Tweets, but I’m certainly not trying to deliberately hurt someone or make them suffer. On the occasion that I become a snarky arm-chair critic, it’s usually about a topic that I pride myself on being an influencer in (like music) or for the kind of ‘celebutards’ that outrageously court attention like the Miley Cyrus’s of the world. And Mimes. I hate mimes. 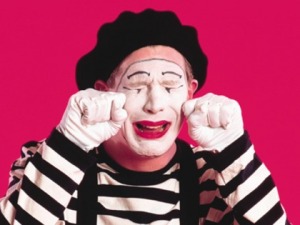 Save Your Tears Mime!

Would I attend Blissdom next year? Probably. It did energize me in ways that I was very pleased with. There were lots of glad-handing and connections made, and I know it can only improve with time.
XOXO

2 thoughts on “I Came, I Saw, I Attended My First Ever Blogger Conference-#BlissDom 2013”